Built-up districts in Rotterdam get greener and greener

Rotterdam, 13 December 2012 – Turan Yazir, in charge of day-to-day management of the Feijenoord sub-municipality, and Hugo ‘t Hart, Residential Services manager of housing association Vestia Rotterdam Feijenoord, install a panel for the new green façade at ‘t Gemaal at Pretorialaan in Rotterdam. The first green façade in the Feijenoord sub-municipality was designed by green specialist Mobilane from Leersum and can be found opposite bustling Afrikaanderplein.

The green wall measuring 50 m2 therefore has a considerable impact on the immediate area; it conveys a pleasant sense of calm and forms a natural transition towards the adjacent Afrikaanderpark. The construction of the façade garden forms part of the Make Rotterdam Green Project.
The green façade also ties in well with the ambitions of the owner of ’t Gemaal, Vestia housing association, to transform the district Afrikaanderwijk into a place where people love to live. Local parks and additional plants and trees form a vital element of the development of Afrikaanderwijk.

Make Rotterdam Green Project
The Make Rotterdam Green Project (Vergroeningsproject Rotterdam) is an initiative of Alexandra van Huffelen, alderman responsible for sustainability, inner city and external space, to make the ten most built-up districts in Rotterdam greener, thereby improving the quality of life in them.
Two of these districts, Bloemhof and Afrikaanderwijk, are located in the Feijenoord sub-municipality. Because so little space for green is left, making highly built-up areas green demands a high dose of creativity and alternative solutions. Among other things, the local authorities are thinking of a greener setup of pedestrianised areas and of temporary or mobile green on construction sites. The vertical garden against the blind wall at ’t Gemaal is one example where the restricted space available has been creatively used for greening.

Green façade
The green façade at ’t Gemaal is a so-called LivePanel by green specialist Mobilane from Leersum. The LivePanel consists of separate panels of 60 x 100 cm (h x w) and is attached to the façade by means of a light, aluminium structure. The LivePanel is entirely filled with a mixture of evergreens and flowering plants. The façade garden contains Heuchera, ferns and Campanula, among other things. As in a normal garden, the plants hibernate during the winter, after which they will start growing and flowering when spring comes around. The innovative LivePanel system has an integrated irrigation system that supplies water and nutrients. Green specialist Mobilane is also responsible for maintenance and has given the local authorities a growth guarantee. The expected lifespan of the LivePanel is at least 30 years. 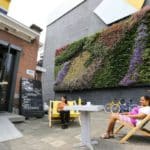 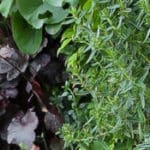 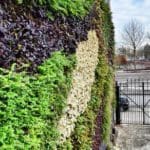 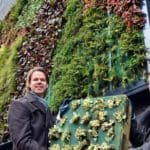